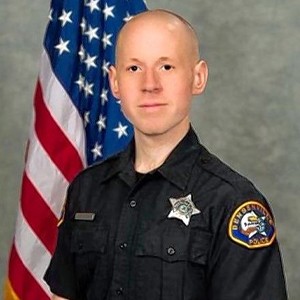 In the early hours of Saturday, November 6, 2021, Bensenville Police Officer Steven Kotlewski was the first to arrive on scene at a domestic disturbance call. Upon his arrival, the suspect fired several gunshots, critically injuring Steven. He was shot 8 times, including two to his back, one of which was stopped by his protective vest. Kotlewski’s fellow officers quickly arrived on scene and aided with life-saving measures. Steven was immediately rushed to the hospital in critical condition. He underwent emergency surgery to repair two shattered legs. This was quickly followed by a second surgery to repair damage to his kidney, liver, colon, diaphragm and pelvis. Additionally, over the course of the last week, Steven has undergone 6 surgeries, totaling over 50 hours in the Operating Room. Although he continues to make progress towards a recovery, he still remains in the ICU.

Officer Steven Kotlewski is a 12-year veteran of the Bensenville Police Department. Above all else, Steven is a devoted husband and fun-loving father to three young children. Steven and his wife Crystal have expressed their immeasurable gratitude for the outpouring of love during this devastating time. While Steven continues to improve, there is still a long road ahead of him and his family. At this time, it is still unknown whether he will be able to return to his job as a Police Officer.

On behalf of the entire Fireplace & Chimney Authority Team and our sister companies, we would like to express our most sincere gratitude towards not only Officer Kotlewski, but all Law Enforcement Officers. We so often take their dedication and selflessness for granted and are quick to forget that these individuals are more than just a uniform. They are mothers and fathers, husbands and wives, sons and daughters. The men and women behind the blue risk their lives daily in an effort to protect ours.

We hope you will join us on Saturday, December 18, as we show support to Officer Kotlewski and his family. The Fireplace & Chimney Authority will be accepting donations at the event to benefit the family during this trying time. All donations will be matched dollar for dollar by the Fireplace & Chimney Authority Team! The event will take place between 9:00 – 11:00 am and will include loads of fun surprises for children and adults. Come take a photo with Santa and Mrs. Claus, enjoy some hot cocoa and coffee and support a great cause! Officer Kotlewski’s wife and children are also scheduled to attend.

About the Author: Julie G